What do CNN, Dalai Lama, FEMA, and Avalution all have in common? All embrace social media in the form of Twitter to interact with users and share breaking news. Displaying topics ranging from H1N1 and Haiti to the best local cup of coffee, Twitter has created a new baseline for effective and efficient communication. With the ease of use and scalability that social media provides, organizations are looking to understand how social media not only fits into their marketing and branding efforts, but also their business continuity capability.

Social Media as Crisis Communications
Building an effective crisis communications plan has always been about leveraging your organization’s existing external communications capabilities in a rapid response structure. However, over the last few years, social media has significantly changed how many companies communicate with their customers, employees and vendors – so it might be time to reflect that shift in your crisis communications plans. In addition, social media are uniquely positioned as being most valuable during times of crisis, giving business continuity professionals the opportunity to help educate and lead the deployment of tools such as Twitter in the enterprise. This adds value to the organization and aids in making the business continuity capability more robust.

Now let’s take a quick step back! If you’re unfamiliar with social media and Twitter, let’s get on the same page. As defined by Wikipedia, social media are designed to be disseminated through social interaction, using highly accessible and scalable publishing techniques (most commonly the internet or mobile-based tools). While sites like Facebook and MySpace pioneered this field, Twitter is the epitome of social media because it allows users to quickly and efficiently interact with one another 140 characters at a time through what is called a “tweet”.

So right now you may be asking yourself, “How exactly can social media, especially Twitter, add value to my organization’s business continuity and crisis communications efforts?” Let’s take a quick look at two recent examples in both the public and private sectors.

Public sector: Lloyd Brown, spokesman for the Washington State Department of Transportation, details how his organizations uses Twitter for emergency communications. “In an emergency, people will come to our website en masse to the point that it overwhelms our servers — we’ve had that happen during snowstorms and other major weather events. If we get into an emergency situation like that, we can update Twitter and our blog with our handheld BlackBerry or iPhone or whatever we have. It’s a continuity of operations opportunity for us.”

Private sector: More than 99,000 customers worldwide turn to Rackspace Hosting for their website and email hosting needs. However, on June 29, 2009 customers noticed that websites were no longer loading and email was no longer being exchanged. Left with limited communications as call centers reached capacity, Rackspace turned to Twitter for crisis communications:

Both of these examples show how organizations are turning to social media to identify manual workarounds for communicating during a crisis. Many other examples of Twitter being used as a crisis communications tool can be found in Figure 1.

“Twitter has many advantages! #win”
If you navigate to www.twitter.com and create a free account, you’ve just added another crisis communications tool to your toolbox in less than five minutes. Sure, you can spend time creating a custom-made design that reflects your organization, but almost immediately you can begin communicating (140 characters at a time) with Twitter’s more than 100 million users. Connect your account to other social media, such as Facebook or LinkedIn, and you’ve just increased your audience to nearly 600 million users.

According to a recent article in USA Today, first responders to the terror attacks of September 11, 2001 spent millions of dollars to synchronize their communications systems. “But during Haiti’s disaster, everyone was tuned to the same channel, and it was called Twitter,” says Jeff Pulver, a technology entrepreneur and founder of #140conf. The latest Disasters 2.0 conference, with over 100 public and private information officers, came to a similar consensus. First, social media isn’t going away and emergency officials and public information officers need to figure out ways to use it.  Second, there’s no wrong way to get involved with social media. Figure 2 makes this consensus very clear, as social media has grown, on average, over 23% since 2008. This number will almost certainly continue to increase as it becomes more integrated into everyday life via Smartphones and new mobile technology such as the iPad. 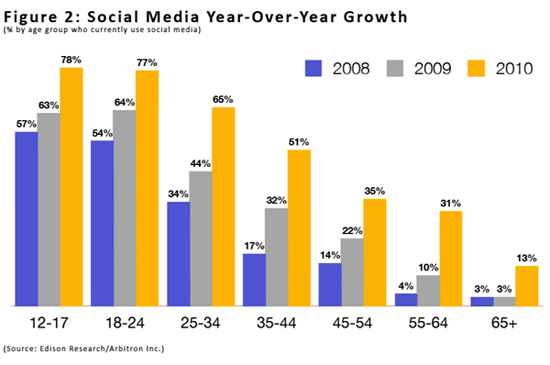 As a free and hosted service, social media such as Twitter are changing the way the world communicates. In the end, perhaps social media consultant Joanne Jacobs says it best. “In essence, social media are the greatest gift to crisis management and business continuity planning that has ever been invented.”

“Twitter has many disadvantages! #fail”
If you’ve ever logged into Twitter just to be greeted by a giant “fail whale”, you’ve certainly noticed one of the downfalls of the service. As a free and hosted service, users and organizations rely on Twitter to be up and running at all times. Unfortunately, without an uptime guarantee, users are sometimes left in the dark if servers can’t keep up with capacity (as seen after the earthquake in Haiti). And, similar to any online platform, Twitter is susceptible to denial of service attacks and security breaches.

There is no argument that social media sites have seen explosive growth over the past several years. However, a closer look at Figure 2 will show that most of that growth is centered on users between the ages of 12 and 44. And, according to that same study, while 87% of Americans are aware of Twitter, only 7% actually use the service. Compared to other communication tools such as text messages, emails and voicemails, Twitter is by far in last place.

Similar to other aspects of business continuity, proactive planning with Twitter as a crisis communications tool helps ensure greater success at the time of a business interruption for two main reasons. First, in order for users to receive information via “tweets” at the time of an event, they must choose to follow your organization, which can take some time. Second, if an organization doesn’t have a history of using these tools, they will have no credibility when they start tweeting at the time of the event. Without that history, there is no way to confirm that the person using twitter is actually an authorized spokesperson for the company. What’s more, there is significant potential downside: without an active presence in the dialog on Twitter, there is no way to easily counter false information that is posted during a crisis situation.

No matter these disadvantages, organizations are often slow to embrace social media due to the inertia they confront from internal policies and guidelines. Many organizations are uncomfortable with a medium that allows personnel to so freely communicate with the public. Further, companies struggle with establishing guidelines for employees and partners regarding what can and cannot be posted on Twitter, Facebook, MySpace, etc. As a result, organizations seem to default to a blanket ban on the use of these tools throughout the organization. Your decision to integrate social media into your crisis communications and business continuity planning should coincide with established policies regarding social media. To help counter these obstacles, services such as Yammer provide the same interaction as Twitter but are limited to internal personnel only.

<p style=”margin: 0in 0in 10pt;”>As H1N1-related tweets topped 10,000 per hour at the peak of the pandemic, the CDC used Twitter to provide links to advisories and FAQs.</p></td>
<td style=”vertical-align: top;”>
After a story on CNN reported the crash of a C-17, the Air Force responded immediately to control the rumor.<span>  </span>Within 57 minutes, CNN retracted the story.</td>

<td style=”vertical-align: top;”>
Unable to communicate through traditional methods after the Haiti earthquake, MSNBC reporter Ann Curry tweeted about a Doctors Without Borders relief flight that was unable to get clearance to land.<span>  </span>Within minutes a response was posted by the U.S. Air Force: “We’re on it”.</td></tr></tbody></table>