What Business Continuity Planners Need To Know About Virtualization

All business continuity professionals should be aware of an important new technology that is quickly changing the way many IT organizations operate. Virtualization has become increasingly popular in recent years, enabling IT organizations to reduce costs and recovery times. Avalution takes a closer look at this technology and how it can help disaster recovery.

What is Virtualization?
Most organizations typically have a “one-application, one-server” approach in place, where each application has its own server (or servers) to run from. This approach reduces the risk of applications interfering with each other as they run.  However, utilization of the server’s resources (such as processor time) is often less than 10%. Virtualization software works by enabling organizations to place several “virtual” servers onto one “physical” server, thus allowing one processor to serve several server instances and enabling resource utilization to jump to 75-80%. For all intents and purposes, virtual servers are completely independent of one another, they just happen to share the same physical server resources.

How Virtualization Works
Virtualization starts by taking all the content normally on a hard drive and storing it as a single file. While the file is often very large, it is all that’s needed to start running that virtual machine. As a result, the file can be placed on a physical server and “run” using virtualization software.

Most servers today are capable of virtualization, and only need enabled by a software package called a hypervisor. The hypervisor is software whose only job is to allocate physical resources to virtual machines. The hypervisor also enables management of each virtual server so it can be “powered down” and “restarted” without affecting the other virtual servers on the same box, just like they would normally be powered down if on separate boxes. 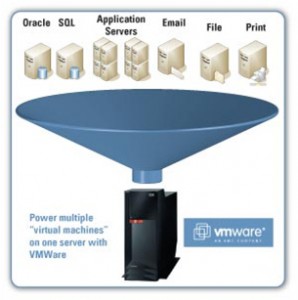 Another tool, offered by industry pioneer and leader VMWare, is called VMotion. VMotion utilizes a common set of storage space to enable the seamless move of a virtual server from one physical server to another server. This is particularly useful for physical server maintenance, or for recovering virtual servers hosted on a machine that fails.

How Virtualization Can Reduce Recovery Costs and Enable Shorter Recovery Times
Because the entire server is represented by a single file, backup and recovery is greatly simplified. Some organizations backup the single file so the entire application is in one snapshot; others continue to backup each individual virtual server. Regardless of the approach, recovery is as easy as restoring the file and starting the server. This eliminates the time needed to reconfigure applications and reset databases. In addition to speeding recovery times, virtualization is also helping IT Infrastructure managers save money.

The servers used to run virtual machines may be individually more expensive (they can range anywhere from $10,000-$30,000 depending on processor size/speed and other features), but the ability to combine as many as 20 physical servers onto one physical server significantly reduces the cost of purchasing individual servers for each application (which can run anywhere from $5,000 to $10,000). Further, organizations using virtualization often report significant cooling and space savings as well, which can be extremely beneficial for organizations running out of space and/or using datacenters not necessarily designed with the ideal cooling, protective environment.